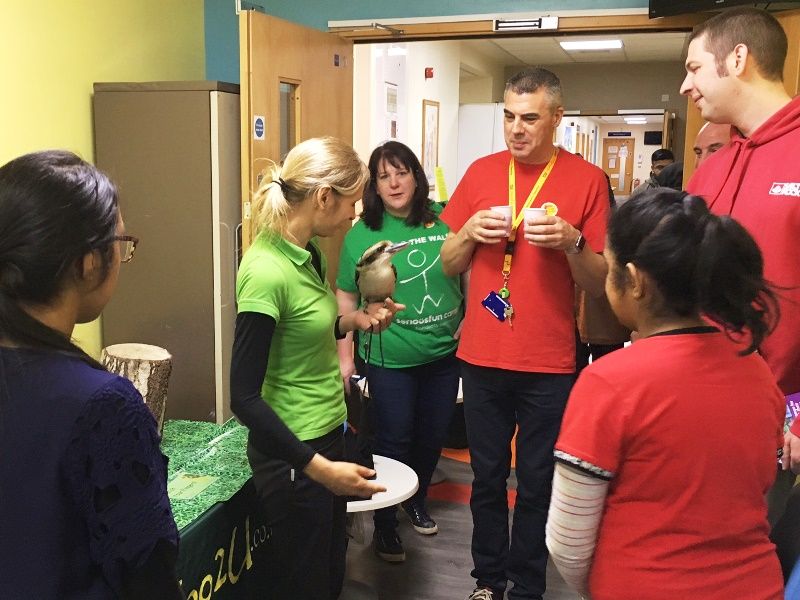 Today we were once again visiting the Birmingham Children's Hospital. It was a very special Rare Disease Open Day put on for all of the children and their families. We at Zoo2U love this sort of event and take great pride in putting smiles on the children's faces.

We brought Skittles the Bearded Dragon, who suprised a few by just how spikey his back really is! We had Dougie the Royal Python working his charm. There was Woody the playful skunk, who shocked people by the lack of smell but rather how cute he is. Herbert the Horsfield Tortoise, who would not stop eating! The ever fluffy guinea pigs, Molly and Sally certainly received their fair share of cuddles too!

The party piece for this visit was the introduction of Milo the Eclectus Parrot and Kinta the Laughing Kookaburra. Neither of them disappointed with Milo making his presence known through the odd wolf whistle and a few polite "hello"'s. However Kinta stole the show with her laughter which never failed to make everyone else start laughing too!

It was a wonderful event and we were really happy to see some familiar faces of old as well as some new ones! As ever with the Rare Diseases unit, we were really impressed with the level of knowledge of animals the children had.

Special thanks go to Larissa for making it all happen, Tom for being a great organiser on the day and the two Steve's for assisting us from start to finish! We should also mention the pancake man who kept us going too!

To see more pictures, visit our gallery by clicking here.

Zoo2U are a family run business who specialise in Exotic Animal Encouters. Their values are to bring an Inspiring, Educational and Interactive experience every time through their amazing diverse animal collection

For general information about Zoo2U, including registration, please use our contact form by clicking here
This email address is being protected from spambots. You need JavaScript enabled to view it.
07746 277 375
Zoo2U Discovery Centre, Alsager. ST7 2UB